Knock off the Lies: Why Buying Quality LED Lights Matters

Knock off the Lies: Why Buying Quality LED Lights Matters


"Why spend so much for lights when I can get them cheaper without the name brand?"


"This light bar on Amazon has way more lumens and costs half as much - what gives?"


"I can get 100 lights for $10 each on Alibaba you guys are robbing customers with your margins!"


Not All Lumens Are Created Equal - Especially When Others Are Lying

In a multi-part series, we will be breaking down what separates Baja Designs from the imitators, fakes, and clones. Check back often for updates! 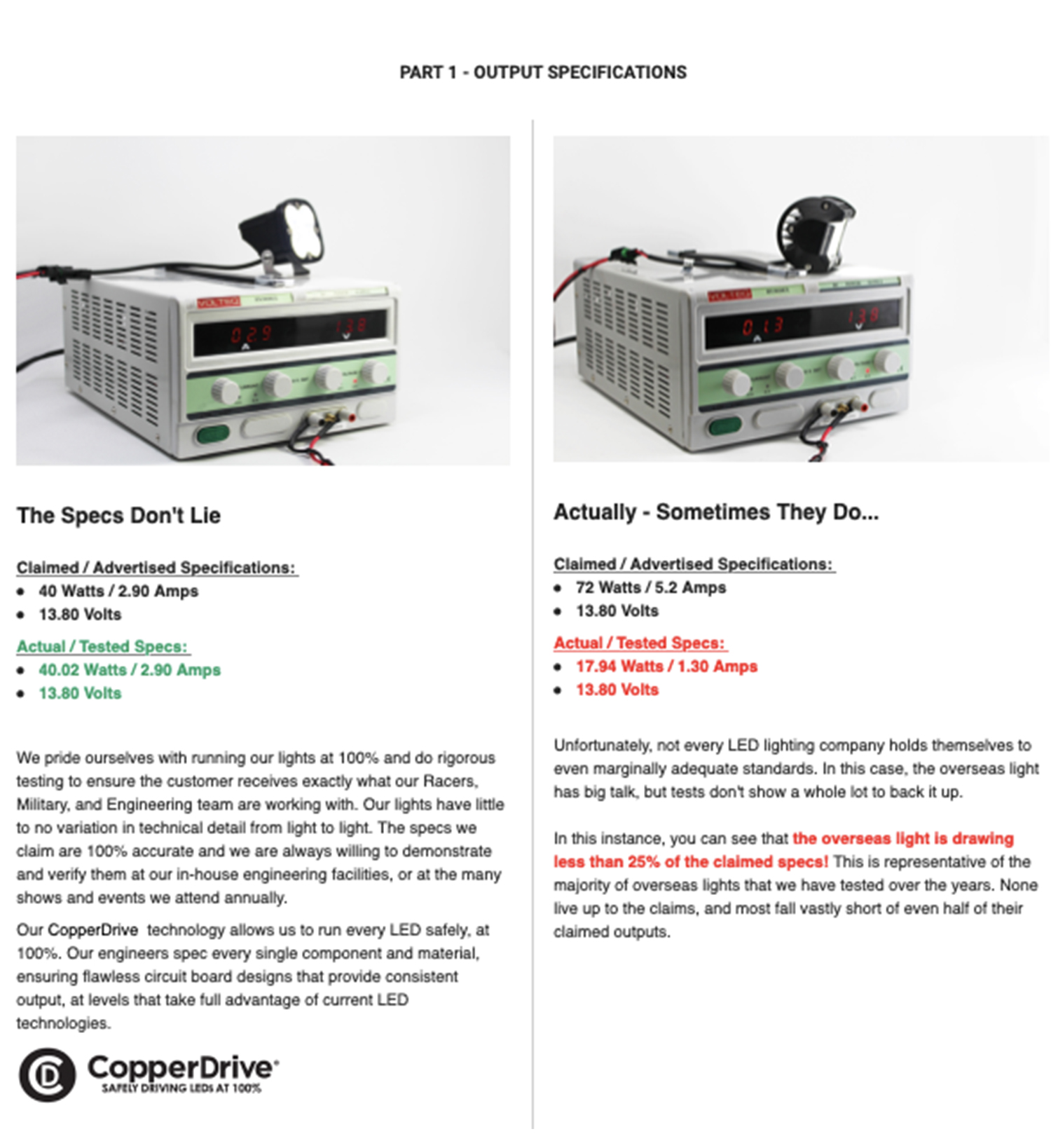 Joined Sep 5, 2012
·
7,210 Posts
OK, since we are going down this rabbit hole ill join. Ill keep my personal bias aside to not liking you company due to a product being ripped off.

So, when WE as consumers want lightning for our SXS we are mostly concerned with cost. We don't want to break the bank but want a cool looking lightbar too. Our end goal is to see in front of us at night, WE are not racing and don't need to see 100 yards down range clear as day. Honestly WE only need to see just as far as the person in front of us or as a leader far enough to not crash. Build quality matters to everyone but when that quality comes with a 3x price over generic inferior product most will choose the generic.

I personally have spent money on cheap lighting and high dollar lighting and just don't see (pun intended) the $$ difference. In the end the juice was not worth the squeeze. Now if you take out the price equation sure ill pick name brand lighting over generic china lights. BUT in the end its mostly about the money.

Joined Mar 15, 2013
·
236 Posts
I don't doubt the quality in design and manufacturing of high end light bars, but if you're a recreational rider, price point matters. Companies like BD can focus on the high end for racers, prestige and the recreational guys that want the best. The majority of the market will be supplied with reasonably priced options. For most, if it works and is bright, the cheaper the better.

Joined Aug 28, 2018
·
2,078 Posts
One thing most people dont look at is power consumption, you can get a cheap light bar that has decent out put but it will use all the power you have if not draining your battery, I’m partial to bd because they put out great light( as an old guy I need all I can get) and want low power draw so I can blast the tunes run my gps ,whips car to car intercom so to me power consumption and output out weight the cost some times you gotta pay if your gonna play , still needing an onyx 6 10” for my shock tower then Ill be done with my light package (for now) Thanks for a great product bd.
► Show Full Signature
Life doesent get much better than eating taco’s down at scorpian bay ,baja sur
2018 x3 xrs/ smart lok,rugged radios,baga design squadron pro’s,onyx6,afx alum. Lower doors,brp door handles, Evo c/d + tune, wet sounds elite 10, aim belt temp, + way too much to list need more $$ not close to being done
Y

Joined Sep 10, 2014
·
715 Posts
Unfortunately for the "Name Brands" with the lights I think 90 percent of the time people will go with the cheaper "generic" bar. I personally love name brands and for the most part you get what you pay for, but these lights are just lights. While there are better built and more efficient light bars, at the end of the day like Mega says if you can see in front of you well enough then sorry 100$ 50" light bar all day long vs 600$ 1000$ 2000$.
For me if the parts and materials were all American and built here I would pay 500 or so for a light bar but 1k and up I'm out, its just too much for something I don't personally use but once or twice a year.

I know you were all dying to know my thoughs so there you have it.

Joined Dec 15, 2016
·
1,528 Posts
Yup. It’s not about spending big bucks on this 50” bar vs that cheap 50” bar. It’s about buying a 10” bar that works great vs buying a 50” bar that doesn’t work for beans. If you’re counting dollars per inch you’re counting the wrong thing. Think dollars per amp, dollars per pound, and dollars per usable lumen. All of these things are at a premium on a UTV. Then again I couldn’t care less about rock lights, flashy whips, beer coolers or boom box sound so I readily admit there are different strokes for different folks.


Is a cheap led as good as a high dollar led? Hell NO A high dollar led projects light farther then the any cheap led can or will go!!!!!
For the average consumer 1500 bucks is a lot of money and to be honest most wont drive fast enough to warrant the need for a light that expensive or powerful all they really need is enough light to see the car in front of them at night?

Light's come in all shapes sizes price and capability the combo's are endless spot driving flood color as a consumer we are going to experiment try things and come up with a lighting solution that fit's our budget and driving style be it a 60 dollar light bar or a 1500 dollar bar..... speed is a matter of money how fast do you want to go?

BD instead of making corny video's about imitators maybe you should do something about it and work on a cheaper line to compete with them?

Joined Nov 7, 2014
·
285 Posts
You can't beat quality. I run a 50" Curved Rigid and it shines against the Chinese knock offs. If you can get a cheaper light with real Cree bulbs, then it's usually a pretty good light, but I've been riding at night where the Chinese crap left drivers stranded in the dark. Just because your bulb says "Cree" doesn't make it one. Lots of knock offs out there.

I am always riding in the back of the pack. These lights have taken lots of shots from many rocks and have never broke.

These are not even BD best pods available. I am also not one for a 1500.00 light bar either. But I don't buying crap twice. I had Chinese pods that did not last a month.

I love them, 2- more XL Sport spots and I will have all the lighting I would need.
► Show Full Signature
2017 XRS
Most of the mods I have done are just fixing crap I break.

Joined Aug 9, 2016
·
280 Posts
Thanks everyone for the feedback. We are looking forward to the next post to provide more info on Build Quality and other details!

Joined Jan 1, 2013
·
8,888 Posts
I don't mind spending more for a quality light. Myself and another friend like to lead at night so lighting is important to us. The cheap lights come with cheap lenses that get frosted easily and many times do not project light very far.

Baja Design has always provided great lighting and I think they have price points for most. The Squadron series of lights put out a good amount of light in a small reasonably priced package. I like my XL80s and Squadron Pros. Those LP6 lights sure do look nice.
► Show Full Signature
Mega made me get Skats and a tune :furious:
Skats for life now :big smile:
KWI clutching and Whalen tune
Thanks for the quote Tim - "Have a unicorny, rainbowey day!"

Joined Sep 14, 2012
·
1,397 Posts
I will have to agree with the China lights being way over spec't and the do not even come close to what is advertised. I had similar results when testing 2 new China lights I purchased this season for my X3 and I sent both back . Having said that I still use the China lights due to price however there are better ones available and work well enough for me. I have not had one fail yet , including rolling on my cage a breaking one off. I ride in the woods and at night your only gonna go so fast and do not need to light up 5 acres lol. The other issue is where I ride there is a lot of traffic and even with my cheapo lights I get the occasional "Hey Ahole dim the lights" lol. My buddy recently bought a Rigid and I feel my single row 50" is brighter than his 40" dual row, Just sayin. Will I ever buy a BD light , maybe if the right deal comes along.

Joined Feb 4, 2014
·
529 Posts
I stated off with a light bar on my Rhino that had 4 each 7" HID's, but I had to rotate the bar down each time to load it in my hauler to clear the beds.
It put out fantastic light, but was a pain. So at one of the SSSS, I purchased a 40" lightbar. It put out a good spread of light, but was no where near as penetrating as the HID's - but I lived with it for a couple of years.
Fast forward to my latest purchase, my new X3. I decided I was going to drop the coin on a named brand light bar (not a BD, but the other guys) and at 1600 bux, its not a cheap ride - but the difference compared to the others in crazy. Is it worth the extra dollars, you need to decide that for yourselves - but the difference is unreal, almost hard to believe until you see it first hand.
I guess had I never had the HID's to start with, I probably would have been happy with the china light bar, but since I had great light before, the cheap lightbar always disappointed me.
You get what you pay for has never rang more true.
► Show Full Signature
2018 X3 - XRS Yea Baby