Joined 2 mo ago
·
7 Posts
Hi everyone, I’ve been stalking the forum for about a week now but this is my first post. Just bought a still in the crate 2018 X3 Turbo R. This is my first sport side by side but I’ve had a ranger and still have a Defender Max HD10 for the farm. While I’m waiting for it to be delivered, I’ve been trying to decide what to get in the way of accessories. I’ve read a ton of the topics already so I have a good idea of what to order first but I’ve got one specific question that I haven’t been able to find the answer to in the search.
My dealer is trying to sell me a pro box roof and from what I can see it looks like quite a slick set up. The issue is cost. $4350 CDN. I’ve already ordered the black aluminum roof ($600) from BRP and my brother is a dealer for rigid so I can get lightbars at his cost. The other option I was considering is the BRP roof audio system (715004900). However it is expensive too ($3100 cdn). So depending on the light at I would buy it could be a saw off. Given that I’m already into this machine for a ton of money I don’t really want to spend the cash up front on the pro box and the second route would allow me to do it in phases. That said, if anyone has seen or experienced both audio systems, is one definitely better than the other? If the pro box were head and shoulders better I would just bite the bullet and get it. Thanks for your advice.

Joined Nov 17, 2016
·
9,968 Posts
Welcome from Tucson AZ, congrats. A lot of members choose another way, and wear either headsets, or helmets with speaker kits. Combine that with an intercom system that is bluetooth capable, you get to hear music from your ipod or phone, and talk to your passenger.

Congrats on your recent purchase.

There a ton of informative threads as well as members hear to help you find the right audio setup.
F

Joined 2 mo ago
·
7 Posts
Thanks for the replies guys.

Joined 2 mo ago
·
10 Posts
I'm pretty new to the can-am scene also. I am also a huge audio freak. I have decided to go a different route with this car and do the rugged radio set up with headsets and intercoms with music in the headsets. When parked and feel like listening to some tunes I'm installing a sound bar and a couple of underseat 10 inch subs. Should do the trick and save some dough for gussets, arms, shocks, sway bars, cage, roof, lights, seats, lol...and so on and so on

Joined 2 mo ago
·
7 Posts
Hey Dewey, thanks for that answer. I’m leaning the same way after putting a few miles on the machine. That thing flat out screams when you’re doing anymore than 40 mph. I don’t have the money for the kind of system you’d need to hear the music clearly at those speeds. It is still nice to have the option to put some music on if you’re sitting around by the fire or having a beverage. Any particular set up you’re eyeing up for the subs and bar?

Joined Jun 8, 2017
·
1,611 Posts
The brp audio roof is much better sounding. No need for a sub with this roof. It would be my choice over a pro box any day. Now with that said I would buy either. I run a sound bar but never turn it up due to the fact that we talk on our radios so much and I need to be able to hear what others are saying about up coming obstacles or where the next turn is. Plus all the other stuff that the pro box comes with sucks according to my friends that have them.


Sent from my iPhone using Tapatalk

Joined 2 mo ago
·
10 Posts
I like the hifonics tps10 with pretty much any 10" sub/amp combination. I found a few cheaper sub boxes on ebay for under the driver's seat or passenger seat. The sound bar is already amplified so the amp can be a small 500 watt marine amp to power the sub. Here are a few links of what I'm thinking and talkin about. Not going to win any audio SPL competitions but should sound good when chillin and havin a snack out on the trail

Find many great new & used options and get the best deals for Can-Am OSWX3S at the best online prices at eBay! Free shipping for many products!
www.ebay.com 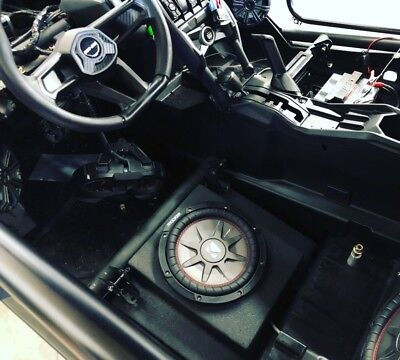 Will Now work at the lower seat position and allow for the seat to slide back and forth. Will Fit 2019 X3 Max Models. Will only fit shallow mount sub woofers.
www.ebay.com

Joined 2 mo ago
·
7 Posts
For future reference for anyone looking into this, I ended up going with the Can Am Audio Roof. I felt that with what I was hearing and reading about the probox light bars I could save some cash and do my own lightbar and get easier/cleaner install with the factory system. It should be here this weekend and I’ll do a little review once I’ve got it installed and put in some seat time with it.

MarkB said:
Welcome from Las Vegas! Where in CA do you ride?
Click to expand...

So far, just close to home here in Manitoba, not far from Winnipeg. Looking forward to heading out west once this virus issue blows over.

Hollywood X3 said:
Welcome from Tucson AZ, congrats. A lot of members choose another way, and wear either headsets, or helmets with speaker kits. Combine that with an intercom system that is bluetooth capable, you get to hear music from your ipod or phone, and talk to your passenger.
Click to expand...

I would 2nd that, go with a headset / intercom set up. Not only does Headsets makes talking to your passenger easier but you can talk to the other cars in your group too. Very Handy

Joined 6 mo ago
·
379 Posts
Welcome! Be safe out there enjoy your ride
Intercom and headsets
F

Joined 2 mo ago
·
7 Posts
So I've been able to take a couple of rides with the new roof. Im pretty happy with it so far, even at 50-60 mph you can still easily hear the music, but that's probably because the speakers are only a couple of inches above your head. I haven't turned it up past 30 yet (it goes to 40 I believe), mostly because it makes your ears hurt when you start to slow down if you do. I will be adding the sub to the system in the future but the bass from the roof is surprisingly good. The roof doesn't provide as good coverage as the aluminum one I had previously (For sale btw, $475CDN), but the OEM sun visor would correct that. Install was super simple, had everything done in about 40 minutes. The one complaint is more of a nitpick thing, but the LED rings that surround the base of the speakers don't allow for full color control, you basically get blue, green, red and orange. But if you turn on the fade option then all of a sudden there are all the colours in-between as it fades from one colour to the next. Ex, you can suddenly get purple as it goes between blue and red, and pink as it goes from red to orange. Its a small issue but still I would expect better from something with the price tag this roof carries. Overall I am very happy with the roof so far and would recommend it if you're looking for a clean install and loud music at a somewhat reasonable price point. In the end I felt I couldn't justify the intercom system as I don't ride with a consistent crew with SXS's and also no one in these groups has a radio so car to car comms weren't in the value proposition for me. I may change my mind when the time comes for the next car lol.
1 - 15 of 15 Posts
Join the discussion
Continue with Facebook
Continue with Google
or sign up with email
About this Discussion
14 Replies
9 Participants
Last post:
Farmboy204 6 d ago
Can-Am Maverick Forum
A forum community dedicated to Can-Am Maverick owners and enthusiasts. Come join the discussion about performance, accessories, modifications, troubleshooting, maintenance, and more!
Full Forum Listing
Explore Our Forums
Maverick X3 Maverick Discussions Member Introduction Engine and Drivetrain Maverick Accessories
Popular Communities